On leaving Mapbox after 12 years

It’s been about nine months since I left Mapbox and the circumstances of my exit didn’t offer much opportunity for closure. I feel a combination of gratitude and resentment that I’m still sorting out. Last week was the one year anniversary of the Mapbox Worker’s Union going public, the event that lead to my departure. So, now seems like an appropriate time to share my story. It may offer some insight into how the tech industry operates. Mapbox’s story is likely similar to other companies with promise and ambition that haven’t quite broken through.

I started working at Development Seed, the digital agency that Mapbox eventually spun out of, 12 years ago. I was 22 and finishing a studio art degree. I had two relevant skills: I knew how to draw, and I knew how to use Inkscape’s pen tool. One of Development Seed’s early employees (who is now the CTO of Mapbox) found me by browsing the “Inkscape” tag on DeviantArt. At first, I thought my recruiting email was a scam.

I hadn’t taken a design class or written a line of code before I started. I had never had an internship. I didn’t get interviewed. I did not have career aspirations in tech. I planned to be an artist. I needed money to pay for a vandalism bill (long story) so I agreed to take on some contract work. Once I started, the culture pulled me in. I had never been around so many competent, effective people before. I got paid to learn design, product development, and software engineering from the best teachers I’ve ever had the privilege of knowing. I had opportunities to fail big and learn from mistakes.

Before Development Seed, I had never even known a programmer. I didn’t think I was smart enough to learn to program, so I never tried. Colleagues there showed me it was possible to be a programmer, a designer, and an artist at the same time. 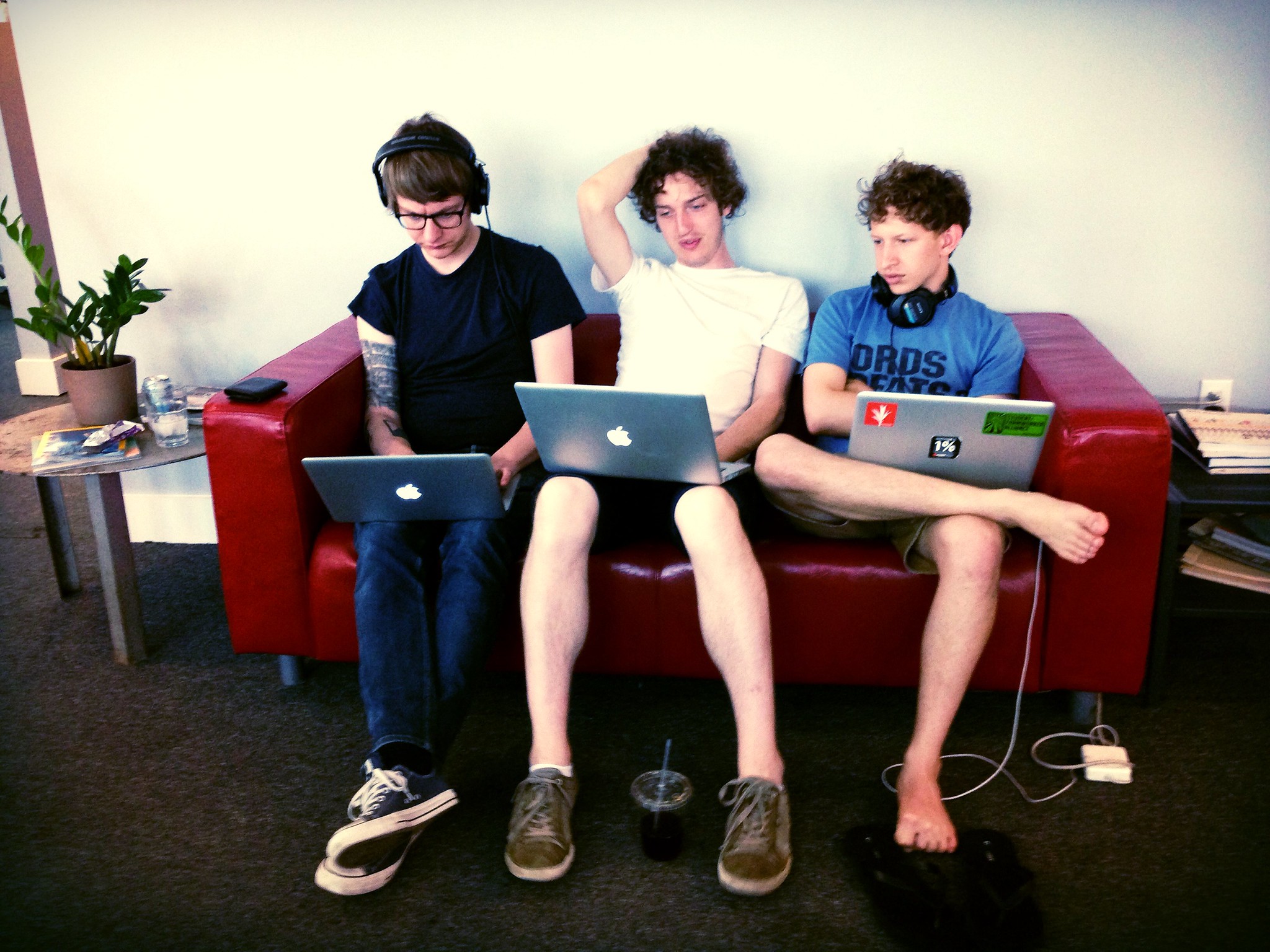 Learning how to program is hard but most people can do it. There are two requirements, really: emotional regulation and patience. When I learned how to Google properly instead of spiraling when I got stuck was the moment I was on the path to success.

Learning how to design is hard too, but it’s just easier to convince yourself that you’re a good designer when you aren’t. I became a good designer when I realized design has nothing to do with whether or not I think something looks cool. Good design is in service to problems and users. My ego drove a lot of early work at Mapbox, and it held me and my team back. Now, when I want to make something for myself, I make art. When I want to solve a problem, I follow a design process.

It took years and hundreds of employees before Mapbox stopped feeling like a personal project. As the company grew and added hierarchy the autonomy of designers and engineers gradually eroded. The first time I ever heard the word “career” spoken aloud at Mapbox was about 4 years ago, shortly after the current CEO started. I had always thought of Mapbox as a series of increasingly high stakes projects that we needed to finish. I still bristle at the word “career”. Not for me. It’s a small personal victory that I quit Mapbox after 12 years with the job title Designer and no career level.

As the years passed, I transitioned from being a learner to being a teacher. I owed it to those less further along in their journey. By that time, the culture had changed. There wasn’t as much room for exploration or failure. Still, my top priority was to pass on as much knowledge as I could and encourage others to take ownership over the parts of Mapbox I knew intimately and helped build. I was even an engineering manager for a couple years at one point! I am proud of that work, and in my way, I thrived during my later years.

Even though I am grateful for all I learned from Mapbox, I can’t get over some of the decisions the leadership team made over the last few years.

I think about a conversation I had with Mapbox’s founder and former CEO outside of the bar All Souls in DC. It was shortly after our first funding round. I was already mourning the loss of control of this thing we all built. He said he felt the same way. I mentioned that when it’s over, I’m never getting another job in tech. He agreed with me again. I think he said he’d go back to bartending. I have since learned he says whatever he thinks people want him to say. Even though I knew I was headed toward tragedy the moment we got funding, I still stuck around to watch it happen.

Over the next few years, Mapbox tried to find success in a variety of industries: journalism, social media, travel, etc. We never hit numbers that were big enough for our investors. In the process, we abandoned our focus on Open Source and Open data. Then, as is the case with many mapping companies, Mapbox shifted focus to the auto industry. My fear of loss of control fully materialized at this point. I’m a lifelong bicycle commuter, and I think cars are unequivocally bad. They ruin cities, contribute to environmental decline (even electric cars!) and kill people. It’s hard not to be ashamed that I helped build a company whose mission is now to make new cars more appealing.

Besides my personal ethical objections, from a business and social impact perspective, maps for cars feels like a dead-end play. Everyone is better off using their phones to navigate because Apple and Google have the most resources, best data, and the best UX.

Trying and failing to unionize at Mapbox

During my last months at Mapbox, I was on the organizing committee of the Mapbox Workers Union. I believed in the union for a few reasons: A company like Mapbox hadn’t ever unionized before, so it seemed like an exciting experiment in building a different, more humane tech company. Maybe with a union, we could shift the company’s direction toward making products that I, and my colleagues, could believe in. If not that, at least we could help create a more comfortable, supportive, equitable work environment.

Mapbox’s leadership team had the opportunity to do the right thing when we went public with the union, and they chose not to. They launched an aggressive, dishonest anti-union campaign that tore the company apart. When I left Mapbox, most of the other early employees (who were now part of management) didn’t even say goodbye. Mapbox management was willing to risk everything to avoid a union and they succeeded. We lost the vote, 81 to 123.

It’s funny how far Mapbox is now from the early Development Seed days. Dev Seed was founded as a progressive, politically engaged digital agency. One of the founding inspirations for the organization was Howard Dean’s 2004 union-endorsed presidential campaign. The politics of those who stepped into leadership positions at Mapbox shifted to libertarianism over the years. I think that’s the only way to rationalize the decisions they made that put investor’s interests before their employees or the world.

Before full-on libertarianism took hold, our CTO once showed an income inequality graph in a management meeting and said something along the lines of, “when a software engineer sees a chart like this, it’s an emergency event. What can we do to fix the world?” Those conversations don’t happen at Mapbox anymore. Mapbox is in the business of making auto manufacturers happy and delivering shareholder value.

I hope another group of workers out there at a company like Mapbox is brave enough to try to unionize again and win. Fight for big change: higher pay for non-tech contractors, a seat at the decision-making table, 4 day weeks. Change the nature of the relationship between unions and management. Fight for motives beyond profit. Fight for protections for whistleblowers. Take control away from VCs whose incentives are misaligned with both workers and end users. Technology is fundamentally neutral, and on the whole hasn’t made the world a much better place in the last couple decades. Worker’s voices can be a corrective force towards more humane technology.

The skills and connections I developed at Mapbox set me up for a smooth and satisfying career transition. I’m making videogames now, for myself and as part of a small team. I feel like an artist again! I just wish I could feel better about the company that Mapbox has become.

Here’s some advice as a jaded start-up veteran: business models and investment terms are kind of the only thing that matter. Even if you’re a lowly designer or engineer, you must understand what your company needs to do to be sustainable. It very likely is different from what they’re doing now, and may come with unexpected ethical compromises. What will the cost of sustainability be for you?